What a great day the boys had for a run and a kick.  The LSU parade grounds were a soft emerald green and the skies perfectly partly cloudy.  We warmed up a bit with kicking footies, foot passing soccer balls, and throwing footballs.  With Neil and Rob picking teams, we kicked off our day with soccer where the teams ended in a one to one tie after twenty minutes.  After a some much needed oxygen and water, our next sport was American Football, light tackle. Our group picked up two LSU Students, Tyler and Ross who joined opposing teams. Team Rob came out on top with a two to one score (single points for touchdowns).  Then, with our winter joints oiled and a little bit of athletic rust shaken off, we jumped into some footy.  There were some great defensive plays, some good movement of the footy with hand balls and drop kicks. Team Rob came out on top again at the end of twenty minutes. Both Tyler and Ross showed great promise, learning the ropes of Aussie Rules and getting into the mix of things. We also had a great sideline crew with Robin (resting for a Marathon), Nicki (out with a pulled back), and Elise (photographer).  Next on the list…First Practice – Feb 22.  More to come.

In half of a fortnight, the footy club will be hosting our first event of the New Year. The details are as follow:

Where: LSU Parade grounds – near Dalrymple Dr and Highland Rd

What: Non-illegal organized shenanigans, bring sportswear, cleats, mouth piece if you have one.

Come out and meet some of your 2015 Baton Rouge Tigers. We will have several sports balls to play around with, water, and t-shirts for sale. Even if you don’t want to throw or kick anything, we’d love to meet you and hang out a bit. All of our Australians have been vetted and do not bite. There will be an after-after party at Chimes immediately following, so bring an extra shirt or change of shoes. Chimes is located at 3357 Highland Road, Baton Rouge. Check out our facebook page for more details and updates. 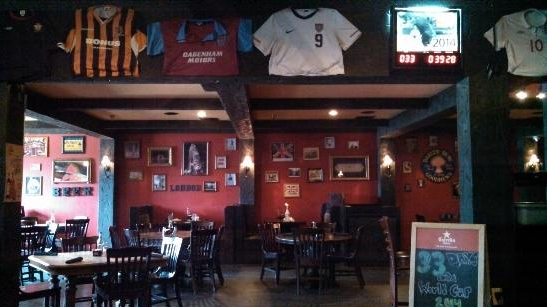 The Baton Rouge Tigers had their annual meeting this past Sunday at The Londoner in Baton Rouge.  First of all, many thanks to The Londoner for putting up with our lot.  The meeting was productive and many items were discussed about the upcoming 2015 season.  Elections were held and we would like to congratulate the 2015 Board headed by Josh Cartmill as President.  Josh expressed a desire for the team to push for recruitment of new players, and to set a positive tone for the season, on game day, during practices, and generally everything that involves our footy club.  Other elected positions went to Adam Diaz (Vice President), John Zimmerman (Treasurer) and Neil Stebbing for Head Coach.  Neil will be taking this role head on, as he has retired from active play at the end of the 2014 season.  Next up for the Baton Rouge Tigers we expect to see the 2015 fixtures and some team events scheduled and published for the upcoming season.  Merry Christmas and Happy Holidays, keep practicing, and we hope to see you next year.

Our 4th Annual Baton Rouge Tigers Party is upon us! We will be hosting a party by the pool on the Sunday of Labor Day weekend. Join us for a chance to hear some great stories and revel in LSU’s most recent win over Wisconsin in Houston. We will be grilling by the pool with a trusty keg by our side. This is a kid friendly event so bring your family and friends along. There is no better way to gear up for our next footy home game than relaxing with some of your favorite Aussies!

We are asking everyone to please park at IBM or Calloways up the street.

As a reminder our next two games are home games with tailgating for the LSU games on the Parade Grounds to follow. Bring a friend and come out and support your favorite Tigers!

September 6 against the Houston Lone Stars

September 20 against the Atlanta Kookaburras

After shaking off the holiday lethargy, the Tigers are gearing up for a big 2012 season.

The season will kick off with a post-Mardi Gras BBQ on Saturday, February 25th with the first official training session of the season the next day, Sunday the 26th. More details to follow!!!

The 2012 leadership group has been plotting since November to make this the best season yet for the Tigers. If you’d like to join us in our pursuit of footy glory, contact the team at batonrougetigers@gmail.com for more information.

Back on June 5th, the boys from Baton Rouge took one of their biggest traveling groups ever west on the I-10 for the third leg of their season series with the Houston Lonestars.

Conditions on the AC-less team bus were good for the majority of the trip, until Houston’s ugly traffic snarl reared its head and the Tigers got a light baking while slowly navigating construction. Conditions at the field weren’t much better than in the bus as an unrelenting sun poured down on Houston’s bite-sized pitch.
The small field and adjusted quarter lengths did help prevent any heat illnesses from striking players down on the afternoon. As usual, gunfire from the three surrounding firing ranges providing the atmosphere.

With each team fielding nearly 20 players and therefore enough subs to keep energy from flagging too much, the Tigers and Lonestars locked into a spirited affair.

Houston’s big ruckman displayed his continuing improvement by winning the majority of the hit-outs. While he provided good delivery to his on-ballers, the weight of the Tigers’ relative experience across the field was revealed as they collected most of the hard possessions and were able to find outlets quickly.

For the first time this season, Baton Rouge got a balanced contribution across the field. It showed on the scorecard with seven different Tigers notching goals. Despite passages of skanky play, the Tigers showed an improved ability to be patient and hit targets with kicking.

Big Daz Duhnke provided a compelling target at center half forward, using his height to mark over the smaller opposition and booting three to lead the scoring for the Old Blue and Gold. Jeff Horn had a quiet day in recording a solitary goal while his partner at full forward, Jeff “Peepers” Phillips played his best game of the season and put two between the big sticks.

Unfortunately, the Tigers experienced deja vu with their goal-kicking accuracy. Reminiscent to their first encounter with the Lonestars this season, Baton Rouge peppered the goal but turned in an awful conversion rate of 13 goals from 33 scoring shots.

Despite their scoring woes, the Tigers turned in good performances across the board, notably Duhnke and captain Kenny “Dragon Junior” DeLucca. Mickey Kleinhenz, who now leads the UsFootyNews.com MVP board, managed a quiet-ish but effective Best On Ground display.

For the Lonestars, coach Dan Holwerda proved irresistible in reeling in mark after mark, many of them contested, but he too was afflicted by sour boots in gathering more behinds than goals.

These two teams meet again this weekend, on June 19th at Clark Park in Baton Rouge for their fourth and final meeting of the season before making the stretch run together at Nationals.

Taking on the Lonestars in Baton Rouge on the 22nd of May. Excellent camerawork by Neil “Scorcese” Stebbing.

Tomorrow afternoon at 1pm, the Baton Rouge Tigers take on the Houston Lonestars in the second of four matches this season.  The Tigers took the first match on the Houston gun ranges, but both teams are sure to have improved both their personnel and skills.

Baton Rouge welcomes back key player James Kavanaugh, who’ll see a reduced workload as he recovers from a torn calf muscle, and Nathan Lane, who rejoins the squad after a successful refereeing stint.  Also returning is second-year player Ruben Nambo.

Assistant coach Neil Stebbing will roam the sidelines due to a foot injury sustained in the Tigers’ recent loss to the Austin Crows.